Back to members
Spain

The school has two locations, one in Barcelona for initial training, international programmes and direction, and one in Madrid for continuous training.  The Director is senior judge Jorge Jiménez Martín.

The selection process currently consists of three exercises, one multiple choice test and two orals. The average preparation time is of more than four years after the university law degree. The initial training for those who have passed the public competition entry exams consists of three phases: the first one is a theoretical/practical phase of 10 months in the venue of Barcelona, the second consists of internships in jurisdiction (6 months) and the third is the substitution and reinforcement phase (6 months), where candidate judges work in the court under the supervision of the Judicial School. A special feature of the Judicial School is to have a team of  full-time trainers ( judges, jurists or university professors). Many outside collaborators, such as judges, lawyers and experts intervene in the School throughout the year.

The Organic Law for the Judiciary provides that the General council must guarantee that all the judges receive individual, specialised, high-quality continuous training. The training actions  are currently based on three main pillars: The State Plan, decentralised programmes, and on-line training.

The school has an international vocation; more than three thousand jurists and judges from Iberoamerica have followed its training programmes. 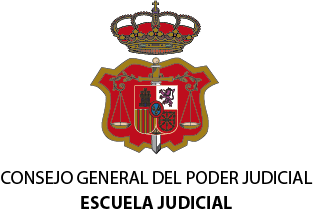