Back to members
Germany

The Federal Ministry of Justice and Consumer Protection (Bundesministerium der Justiz und für Verbraucherschutz, BMJV) is primarily a ministry of legislation, also advising the other Federal Ministries in the preparation of legislative proposals. It drafts legislation in the fields of law assigned to its remit, these mainly being the fields of civil law, commercial and economic law, criminal law, courts constitution law and procedural law for the individual jurisdictions, and service or professional law for judges, public prosecutors, lawyers, notaries, patent law-yers and Rechtspfleger (senior judicial officers).

Since the beginning of the 18th legislative term, the Ministry has also been responsible within the Federal Government for the area of consumer activity. In order to reduce the structural imbalance between business on the one side and consumers on the other, the Ministry focuses on ensuring the transparency, comprehensibility and comparability of products and services. This is done by introducing regulations which create a safe environment, prohibit fraud and deception, and strengthen the market position of consumers. Apart from introducing legislation and enforcing rights, further key instruments include the support of dialogue between the various stakeholders and the promotion of consumer information and awareness.

Beyond this, one of the most important tasks of the Federal Ministry of Justice and Consumer Protection is to perform legal scrutiny of legislation drafted by other Ministries in terms of compatibility with constitutional law and the legal system as a whole. Compliance with formal drafting requirements is also monitored to ensure uniformity and the use of legal language that is as clear as possible.

Responsibility for the administration of justice – e.g. for the courts and public prosecution offices – lies mainly with the individual Federal Länder. This follows form the general principle of the division of competence laid out in Article 30 of the German constitution or Basic Law (Grundgesetz, GG), which provides that the exercise of state authority and the discharge of state functions are the responsibility of the Federal Länder to the extent that the Basic Law does not mandate or allow a different rule. Article 92 of the Basis Law places this in concrete terms for the judiciary.

The Federal Ministry of Justice and Consumer Protection reflecting its responsibility for the law governing the legal professions and legal training provides assistance for the further training of judges and public prosecutors, most notably within the scope of its responsibility for the German Judicial Academy (Deutsche Richterakademie). It represents and coordinates, as the formal member, the participation of the Federation and the Federal Länder within the European Judicial Training Network. 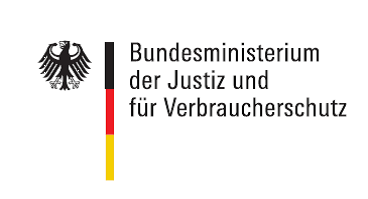